There are three ways to search for possible evidence of intelligent aliens visiting earth.

With over 100 billion stars in our Milky Way galaxy, and with an estimated over 100 billion galaxies in the universe, with many of those stars much older than our sun, it seems statistically favorable for intelligent extraterrestrial life to visit earth, in the past, present, or future.

So I’m curious: Have extraterrestrials visited earth in the past? Are they visiting in the present?

If so, perhaps there is some evidence of this visitation.

THREE KINDS OF EVIDENCE FOR ANCIENT OR PRESENT ALIENS

There are three main ways that ufo enthusiasts search for such evidence:

My background is in physics, so my goal is to approach this scientifically:

Unfortunately, mainstream science isn’t always objective about every topic, and isn’t always supportive with regard to certain topics, and aliens may be one of them. However, there are many highly regarded scientists from the past who expressed strong interests in possible extraterrestrial life.

So let me be clear that I’m not doing official research. I’m not out in the field doing firsthand research.

I don’t expect to be able to prove anything one way or the other. (But maybe. I’ll try to be open-minded.)

What I want to do is follow my curiosity, study what work has been done, and see where it leads.

There is a wealth of ufology out there. Certain kinds, such as ancient astronaut theory, is gaining strong popularity, not necessarily within mainstream science, but at least among large numbers of curious individuals.

My interest is to consider many of these popular topics, and see if any of it seems conclusive one way or the other. Again, I don’t expect to find any smoking guns of a definite yes. I’m trying not to have a preconceived expectation. I want to examine what’s out there and see if any conclusions can be drawn.

If you don’t feel that you ‘know’ what the outcome will be, then you have a scientific perspective. Then the trick is not to be too quick to let evidence—for or against—pull you along, but to resist the evidence and force it to convince you with logic and reason.

Ancient astronaut theorists have made a popular case that archaeological artifacts, perhaps along with other types of evidence, may provide evidence of ancient aliens.

There certainly are some fascinating archaeological wonders from ancient times.

A great thing about archaeological artifacts is that there is actual physical evidence (at least, physical remains—sometimes important parts may have been lost or deteriorated).

Now whether or not the evidence favors mainstream science, extraterrestrials, something all together different, or maybe it doesn’t favor any of these, that’s the question.

But there are actual physical objects that can be studied (with limitations—you can’t just grab a block from one of the pyramids and bring it to your laboratory to study).

And while some people may disagree about how the artifacts came to be or what they mean, you can’t question (can you?) whether or not the great pyramids of Egypt or the ruins of Puma Punku, for example, actually exist and what they look like now.

That’s one advantage that archaeological traces have over reports or sightings and over mythologies and historical accounts: There is something physical in plain sight that we can all agree exists.

With reports and historical accounts or mythologies, the objects and events described are often called into question.

If you could shake hands with an alien, that would seem convincing, wouldn’t it?

Or if a spaceship landed on the White House lawn, extraterrestrials came out, and this was televised and broadcast worldwide.

But that hasn’t happened.

Even if you see a ufo, see an alien, or meet an alien, that only convinces you.

As soon as you tell somebody else about your experience, you may find that what convinces you doesn’t so easily convince others.

Some people don’t even believe that humans have landed on the moon. Imagine what it would take to convince people that you’ve seen a ufo.

First, an unidentified flying object isn’t necessarily alien in origin. It could be, for example:

And then there are some known ufo hoaxes, which make it difficult to believe reports of ufo sightings or alien contact.

Pictures can be easily PhotoShopped. In some cases, PhotoShopping is obvious, but in others, it’s hard to tell.

(For example, the image that I used for this post, and the header for the Alien Curiosity website, are obviously PhotoShopped. The lighting and shadows, for example, don’t quite match, though even if those were right, there are other ways to tell.)

Stories and reports can be fabricated.

And even if you have excellent evidence, the government could cover it up or confiscate the evidence. But conspiracy theories don’t help you come up with convincing evidence.

If we could get our hands on an extraterrestrial and show him or her (or maybe we need another pronoun) to the world, that would be a smoking gun.

So while it seems like seeing a ufo or an alien firsthand would offer convincing evidence, unless everybody sees it firsthand, it may not be so easy.

Maybe there is a report that can provide helpful or even fairly convincing evidence. Let’s be open-minded.

But I’m trying to think through the three kinds of possible evidence, not to rule one out, but to help decide which to explore first.

A report may also be able to help corroborate other forms of possible evidence.

I remember when I first heard ancient astronaut theorists interpreting the Bible, other religious texts, and even Greek and Viking mythologies as possible historical accounts.

My initial reaction was not to take it seriously, and that doing so may negatively offset some of the archaeological evidence that they were discussing as possible evidence of intelligent extraterrestrials having visited earth in the past.

But let me go back to something I said earlier: To dismiss this out of hand isn’t scientific.

I should begin with an open mind, see where logic, reason, and possible evidence or experiments lead.

I’m not saying it will lead anywhere. It might lead nowhere very quickly. I’m just saying to bother looking where it leads rather than assume it leads nowhere.

But sometimes, a historical account can be corroborated by archaeological evidence.

So, trying to be open-minded, it seems possible for mythological or historical accounts to work together with other kinds of possible evidence.

Along with being objective, it’s also important to be careful. You don’t want to start to assume that every mythological, Biblical, religious, or historical story is true. We can’t assume that everything we read in modern times is true, so why should it be different in ancient times?

Some advocates of ancient astronaut theory suggest that, with limited means of writing, recording, and preserving writing back in ancient times, it seems likely that ancient civilizations would be more likely to record actual important events. And while that might (or might not) seem reasonable, the key word here is ‘suggest.’

We have to be careful trying to interpret ancient records, sorting out fact from fiction and multiple possible interpretations.

But it may be possible to corroborate some stories with archaeological evidence. If so, I don’t want to overlook that opportunity because I had dismissed this out of hand.

My future posts will explore a variety of possible evidence for intelligent extraterrestrial visitors to earth.

I will first look at a variety of archaeological artifacts.

Where Are the Aliens? 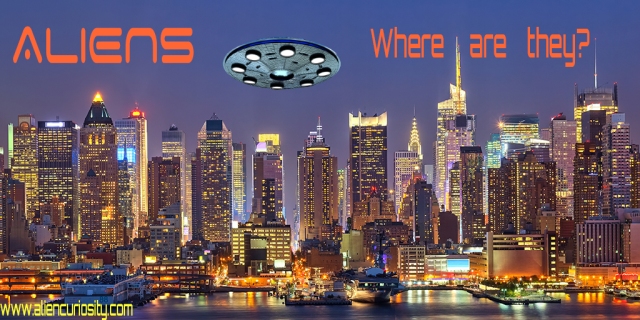 ALIENS: WHERE ARE THEY?

With regard to possible extraterrestrial life in the universe, physicists Enrico Fermi and Michael H. Hart raised the question, “Where is everybody?” [Ref. 1].

This is known as the Fermi paradox.

It seems like there are too many stars in the universe for intelligent life not to form on many other planets. Even if the speed of interstellar travel is small compared to the speed of light, and even with the several millions of years needed for intelligent life to develop in a favorable solar system, it has been estimated that a galaxy can be colonized in a timescale on the order of tens of millions of years (which pales in comparison to the age of the universe).

But if aliens have colonized the galaxy, where are they?

Several possible solutions to Fermi’s paradox have been proposed.

Most of these fall into one of two categories:

Here are a couple of possible explanations which have been suggested to explain this:

Another possibility is that aliens have indeed visited planet earth, but this knowledge hasn’t become widely publicized.

Following are some possible explanations which may explain why it hasn’t become public knowledge:

Ancient astronaut theory and its growing popularity can be traced back to Erich von Däniken, author of Chariots of the Gods? [Ref. 7] which raises several questions about ancient civilizations, for which mainstream science may not have a convincing explanation.

Maybe aliens have visited earth in the distant past, and maybe there is evidence to show this.

Ancient astronaut theory even raises the question of whether or not modern day humans may be in some way extraterrestrial, e.g. perhaps ancient aliens had a hand in genetic development.

This idea intrigues me. In future articles, I will be searching for possible evidence of ancient aliens here on earth.